A  Pesach Lesson by Rabbi Gordon Tucker: Four Children or One?

Last Pesach, we published a profound and learned teaching by Rabbi Gordon Tucker.  We don’t normally re-publish. So why now? Because it’s all about the “why?”

“it is for this very reason that our ancestors were freed, and why people everywhere yearn to be free… to be able to ask what is, after all, the signature human question: “Why?”.”

This teaching is classic; we think it should be read every Passover. 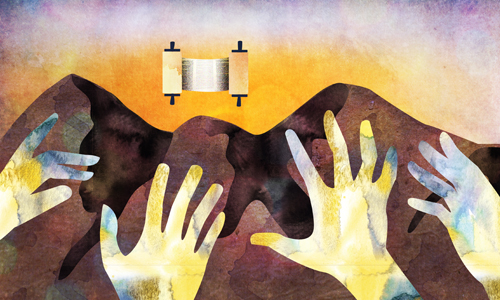 THE “FOUR CHILDREN” AND THEIR PARENT

The dialogue of the four children that appears in the Passover Haggadah has long been a source of questions and confusion, both with respect to externals, i.e. its origin and place in the Haggadah, and regarding its internal structure and its very coherence. Without devaluing the questions about the externals, I shall here focus on the internal issues, among which are:

(1) The descriptions of the four children include three intellectual characteristics (wise, simple, and unable to ask) and one moral characteristic (wicked), and thus there is a glaring internal asymmetry or even inconsistency (a wise person can, after all, be wicked, and a wicked person can be simple, etc.)

(2) The first and second children both phrase their questions in the second person (“tell me about the laws that our God has commanded you” and “tell me what the meaning of this service of yours is”). Why, then, is the first child answered in a civil way (and called “wise”), while the second child is berated (and called “wicked”)?

(3) The Haggadah correctly notes that the four children are present in the Torah (the fourth child, of course, is silent, but is alluded to when the Torah advises the parent to “tell your child on that day….”). But only the third and the fourth are, in the Haggadah, actually responded to in the way the Torah prescribes. The first child’s question was supposed to elicit the answer “we were slaves to Pharaoh in Egypt”, which begins to give a reason for the rite (see Deuteronomy 6:20-21). But instead, this child is given an answer not in the Torah – indeed, it is an answer that could not have been in the Torah, since it is apparently a complete catalogue of all the laws of Passover given in the Mishnah. As for the second child: the apparently legitimate question “tell me what the meaning of this service of yours is” is supposed to call forth the answer “this Pesah sacrifice is offered in commemoration of God’s having protected the Israelite homes when the Egyptians were being stricken” (see Exodus 12:26-27). But instead, this child is berated, and – to make matters even more confusing – is given a sarcastic and caustic interpretation of the very same teaching that the Torah prescribes for the fourth child (see Exodus 13:8), the one who doesn’t ask.

There have been innumerable attempts over the centuries to resolve these problems. Some of them are more plausible and convincing than others, but none seems to settle all the difficulties smoothly. What I shall propose as a reading may also not take us all the way to a completely seamless understanding of this enigmatic text, but it not only makes sense of the dialogue and its apparent disregard of the Torah’s prescriptions, but reflects, I believe, some very basic truths about pedagogy and parenting.

The reader will have noticed that “four children” in the title of this piece was placed in quotation marks. That is because I now invite the reader to imagine that the Haggadah’s text was never about following the Torah’s prescriptions for answering questions, and indeed is not about four different children at all. Rather, I ask you to imagine that we are concerned with a single child, and with the parent’s reactions to what that child says as their dialogue proceeds.

We have already implied that the first and second questions – objectively viewed – are more or less equivalent to each other. They both begin with the interrogative “Mah”, which in biblical Hebrew can mean “what”, but certainly can also mean “why is it…” or “what is the meaning of…”. (Four examples will suffice [there are many more]: Genesis 37:10 and 38:29, and Exodus 14:15 and 17:2). So follow now this explication of the “four children who are really one” and the attendant failure of the parent/teacher, which failure is perhaps the point of this whole section:

The child asks the parent “mah ha-edot….”. Seeing the various rites that the parent is performing, practices that are hardly universal, the child wants to know why the parent is living this way, and why it is deemed important to pass it on to the child. But the parent prefers to understand “mah” in its easier meaning of “what”, and so instead of answering what the child really needs to know, the parent answers the “what” question. “Here’s a catalogue of all you need to know about living a Jewish life, right down to the last Mishnah”. (And: “Am I not a good parent/teacher, and aren’t you a wise child?”).

But the child hadn’t asked a “what” question. The child had asked the crucial “why” question – perhaps the most important question anyone, of any age, can ask. It is highly relevant here to note that the essential message of Passover is that the service of God is unlike the service of Pharaoh (even though the same Hebrew word, “avodah”, is used for both). Pharaoh does not brook “why” questions. No tyrant does. No slave may ask such questions. But the essence of being free is that one is entitled to ask such questions. And one is entitled to answers, or at least good faith attempts at answers.

So let us go back to the child. Having gotten the catalogue of rules, the child feels the need to clarify what the meaning of the original question was.   “No, what I meant was: ‘mah ha-avodah ha-zot lakhem’– ‘tell me the meaning of this service of yours’.” And now that the parent cannot avoid the import of the question, profound embarrassment ensues. Why? Because like so many of us, the parent hasn’t thought very deeply about why we should be doing what we do as Jews, and why we want our children to continue those practices. We are, like the parent, much more comfortable with “what” questions than with “why” questions. Ask yourself this: what is the natural reaction when a question exposes the fact that we lack a reasonable answer? It is to declare the question illegitimate, offensive, and out of bounds, and thus to lash out at the questioner. This is exactly what happens with the “second child”, who is just the same child paraphrasing the original question, which has yet to be answered. But the child is now called “wicked” for asking such an impertinent question.

The child is now perplexed. The question about the Passover rites is put aside for now, and another question comes to the fore. It is: “mah zot”? In all simplicity (the meaning of “Tam”), the child wants to know why this kind of abusive treatment is forthcoming from a parent who is supposed to be a teacher. What is this? Why is this happening?

The parent only has one answer, and ironically, it is the one that the Torah actually prescribes for this question (see Exodus 13:14), though now with a meaning specific to this dialogue. “God took us out of Egypt with a strong arm”. It is God’s “strong arm” that resulted in our being in God’s service. In other words, the parent, unable and unwilling at least to engage, if not answer, the essential question, now vitiates the entire point of the Passover message. Service of God becomes just like service to Pharaoh – we must simply respect the “strong arm”, the power, and not make trouble with “why” questions.

The outcome of all of this is sadly predictable. The child has now been taught, perversely, not to ask questions. [Perhaps we should read the Haggadah’s “eino yode’a lish’ol” as “yode’a lo lish’ol” – the child now knows not to ask!] And in this radio silence, the Haggadah offers the only possible advice: “at p’tah lo” – “you had better reopen the conversation with this child all over again”. And this time, offer the teaching of Exodus 13:8 without the caustic sarcasm. Open a serious dialogue with the child (or with the student, or the friend, or the spouse, or whoever asks) about the essential “why” questions: “Ba’avur zeh asah hashem li b’tzeiti mi-mitzrayim”… because it is for this very reason that our ancestors were freed, and why people everywhere yearn to be free: to end our constriction to the “what”, and to be able to ask what is, after all, the signature human question: “Why?”.

To get a downloadable PDF of this wonderful teaching, click here.