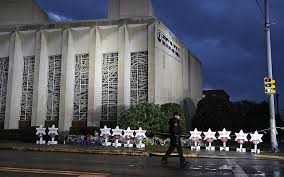 “When a person dies, among our obligations is that of paying tribute to that person’s life.  This mitzvah is even more urgently felt when a person has been wrongfully killed.  The 11 victims of the mass murderer in Pittsburgh are now both the objects of our mourning and the subjects of eulogies that pay honor and respect to their lives as human beings and as Jews.

Rabbi Mishael Zion, a rabbi and educator in Jerusalem, felt yet an additional moral imperative, and that was to give testimony about the nobility of the Judaism that these victims practiced, along with hundreds of thousands of other American Jews in their movement.

In doing so, he tried to bring to the attention of the Israeli public (the piece was written in Hebrew) crucial facts and values that, regretfully, are often overlooked or deliberately ignored in Israeli society.  As such, his piece is not only a fitting eulogy for the victims, but an important statement on behalf of the Judaism that Masorti holds dear and seeks to bring to Israeli society, despite all the obstacles in the way.  In that spirit, we bring you this translation of his piece as “Show Up for Shabbat” approaches.”

I AM PROUD TO BE AN AMERICAN JEW

Everyone carries around a multiplicity of identities. My American one, I tend not to speak of. In any event, it’s readily detectable. But years spent in Israeli playgrounds taught me that it is much better to say “I am a second generation Jerusalemite”. Or, if an ethnic identity must be revealed, then I am entirely Dutch. But an American Jew? That’s not something of which to be proud.

And in general, American Judaism is not something that Israelis like to think about with any seriousness. Certainly not the liberal sort. Until, that is, they are killed because they are Jews, and because they are liberals. And thus, even amidst the pain, and notwithstanding the freshness of the mourning, this is a significant moment in which to stop and think for a moment about the American Jewish liberal community, members of whom died as martyrs last Shabbat…continue reading. Click here to read the full text.  Download, print and share with your family, friends and congregation.