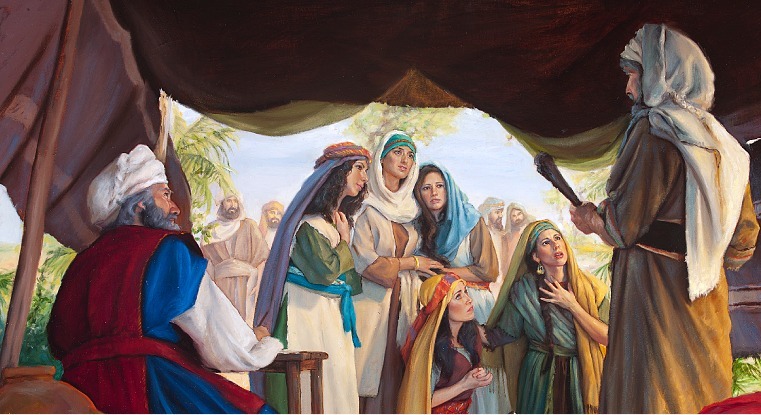 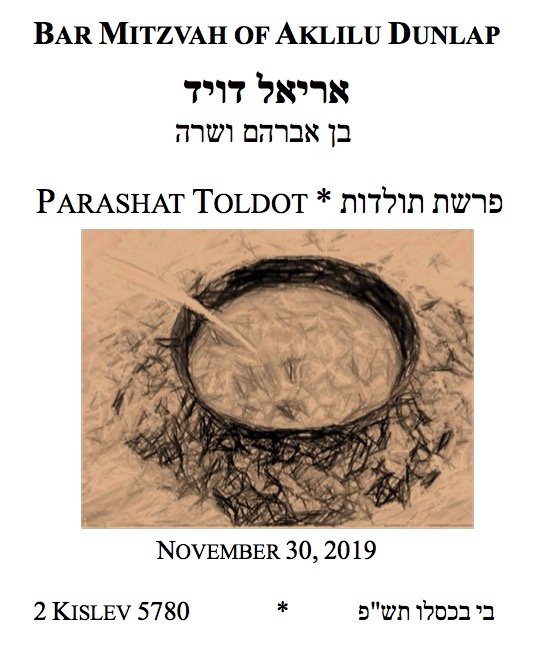 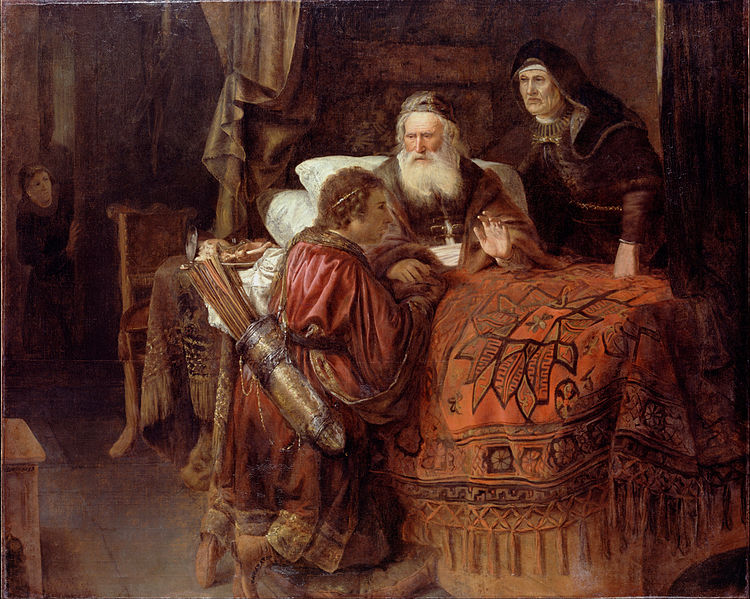 In his evocative D’var Torah,  Aklilu Dunlap, Masorti board member and new Bar Mitzvah “boy,”connects Parashat Toldat, the story of Rebecca, Isaac and Esau, to the rights, or lack of rights, of women at that time and to this day in Orthodox and ultra-Orthodox communities in Israel and elsewhere.

“What is birthright? The rabbis tell us that it is the reward, reserved solely for the eldest born…That birthright is not afforded to the eldest when the eldest is female…Despite the wonderful advancements modern society has achieved, that tradition…continues today in governance, the workplace, education and houses of faith, including in many synagogues where women cannot climb the bema to read Torah, recite a blessing, lead in song or deliver a d’var Torah in a mixed gender gathering.“

In his talk, Aklilu also recounts Parashat Pinchas, where the five daughters of Pinchas, who died without a male heir, implore Moses to permit them to inherit their father’s land. God hears Moses’ appeal on behalf of the daughters and grants them–and all women–the right of inheritance.

Aklilu speaks of the crucial role the Masorti Movment in Israel plays in affording women equality and inclusion.  So that women may enjoy the blessing, among others, of speaking at the Bimah.

“These women—all women—deserve to be heard. When we choose not to hear them, we cheat ourselves of unique insight, intelligence, compassion and inspiration…the synagogues of the Masorti Movement endeavor every day to achieve inclusivity in their daily practice. Unfortunately, they receive a pittance from the Rabbinate’s treasure trove and rely on Jews in the diaspora for support—Jews like you, like me.

Aklilu’s simcha is raising awareness of the Masorti Judaism movement, a movement fighting for inclusivity. In nearly all of Israel’s synagogues, a woman cannot sit next to her husband, recite a blessing or read Torah on the bema or pray at the Kotel (Western Wall). She can only do these things with other women and only in space separate from men. Separate is never equal. By dedicating the Tel Aviv Marathon to this concern, Aklilu hopes to raise both awareness and funding for the Masorti Foundation in its work to help fund the Conservative Judaism movement in Israel so that women’s voices are heard.

Yes, I want to support Aklilu's Run for Gender Equality

Shabbat Shalom. There is value in reading Torah. It is instructive, inspirational and, yes, literary. Employing the best tools of storytelling—metaphor, hyperbole and irony—the Torah can form a road map toward righteousness, inner tranquility and social change. Yet, navigating through Parshat Toldot undertakes unseemly turns–detours into deceit, conniving, exploitation, privilege and favoritism, all begging the question, “Does a wrong justify the means to a greater good?”

In Parshat Toldot, G-d responds to Rebecca’s 20-year barren state by troubling her womb with not one babe, but two—Esau and Jacob, whose birth into the world casts a foreshadowing of the conflict to follow. G-d tells Rebecca that two nations shall occupy her womb, wherein the younger sibling will overpower the other and, by extension, their ensuing nations. Esau will grow to become the cunning hunter and the outdoorsman who will win Isaac’s life-long favor. Born clutching Esau’s heel, Jacob, on the other hand, will grow to become a wholesome man and scholar who will be the בבת ענה, the apple of her [his mother’s] eye.

Esau’s character flaw, the want of temperance, begins his descent. First, he forfeits his birthright for a mess of pottage. Famished after a day’s hunt, Esau entreats Jacob for a bowl of the lentil stew that Jacob is preparing for Isaac, who is mourning Abraham’s death. On condition of receiving Esau’s birthright as the firstborn male—a status intended to serve G-d in the Tabernacle, then in the Holy Temple, Jacob gives him a bowl. Thus, for quick gratification, Esau sells his birthright.

Later, feeble and blind, Isaac senses his end and longs to bestow on Esau his blessing. He tells Esau that he will receive his blessing once Esau hunts and prepares him his favorite food. While Esau is hunting, Rebecca, having overheard Isaac’s entreaty, schemes to have Jacob receive the blessing instead. She instructs Jacob to don his brother’s clothing, then dresses his arms and neck with goatskin to emulate his brother and sends him to Isaac with his favorite food, which Jacob does. When Jacob offers the food to Isaac, Isaac does not recognize the voice and asks, “who is it?” Jacob lies to his father, saying that he is Esau, the eldest son. Isaac tells him to come near, where he can sense the scent of the outdoors on his clothing and feel the hair of his arms and neck. Confident that it is he, Esau, Isaac consumes the meal and then delivers the blessing to Jacob—promise of the dew of heaven, fat of the land and mastery over his brother. The deception is both complete and rewarded.

When Esau returns from his successful hunt, Isaac is beset by grief at the discovery of the deception perpetrated upon him. Sobbing, Esau begs for any blessing, but Isaac merely blesses him with foresight—that Esau will live by the sword and will overcome his inferiority to his brother only when and if Jacob falters. Esau is enraged and vows to kill his brother, so Rebecca creates a ruse for Jacob’s escape—to travel to the land of her brother, Charan, to wed there, lest he marry a Canaanite where he currently lives. And that is, indeed, what Jacob does. Already married to two Hittite women, Esau then takes a third wife, his cousin Machalath, perhaps to win back his father’s favor and with it, a blessing.

Employing deceit to acquire that which you feel you’re entitled to is unsettling by any measure of morality. The tradition of birthright is equally troubling. What is birthright? The rabbis tell us that it is the reward, reserved solely for the eldest born, of the inheritance of his siblings and the right to serve in the tabernacle or, later, in the Temple. Service of this kind requires purity and scholarship, attributes lacking in Esau; thus, by wrestling this right from Esau, Rebecca and Jacob are preserving his life for the errant service he is destined to execute in the Tabernacle and Temple results in instant death of the eldest-born—or so the rabbis tells us.

That birthright is not afforded to the eldest when the eldest is female. And for that reason, perhaps the presumption that worthiness of this right is conditioned on gender is also deceitful, predicated on a false presumption of superiority that holds up an unsteady structure of understanding. Despite the wonderful advancements modern society has achieved, that tradition of deceit continues today in governance, the workplace, education and houses of faith, including in many synagogues where women cannot climb the bema to read Torah, recite a blessing, lead in song or deliver a dvar Torah in a mixed gender gathering. In Israel, the state funds the practice of Judaism. According to the Pew Research Center, an overwhelming percentage of this funding is earmarked for the Chief Rabbinate, which dictates what is and is not acceptable in Jewish practice. These Rabbis are Orthodox Jews whose interpretation of halakha denies women and girls the privileges we men enjoy simply on the “accomplishment” of being born male. These privileges include what I am doing today, enjoying a bar mitzvah. While I have worked hard to prepare for today, I did nothing to earn the privilege to be here. Women and girls—far more capable, insightful and inspired than I, cannot do so in most Israeli synagogues or Kharedi communities throughout the diaspora. The topography of achievement abounds with the footprints of women: mothers, sisters and daughters—like the five daughters of Zelophehad, who died having no sons, an account in Parashat Pinchas that Rabbi Davis recently brought to my attention. Knowing that land is transferred from father to son, his daughters—Mahlah, Noah, Hoglah, Milcah and Tirzah, piously approached Moses, the high priest, the chieftains and the whole assembly at the entrance of the Tent of Meeting. They said, “Let not our father’s name be lost to his clan just because he had no sons! Give us a holding among our father’s kinsmen.” Moses brought their concern to G-d, and G-d listened, found their request was just and instructed Moses to not only give them a “hereditary holding among their father’s kinsmen,” but forever changed the law of inheritance, granting women the right—a decision that some may argue is feministic.

These women—all women—deserve to be heard. When we choose not to hear them, we cheat ourselves of unique insight, intelligence, compassion and inspiration. Perhaps no one knows how palatably visible this loss is than those in Israel’s Masorti movement, a conservative movement like ours. The synagogues of the Masorti movement endeavor every day to achieve inclusivity in their daily practice. Unfortunately, they receive a pittance from the Rabbinate’s treasure trove and rely on Jews in the diaspora for support—Jews like you, like me. A year ago, Masorti Foundation President Heidi Schneider shared a dvar Torah with us on the Foundation’s noble efforts to fund these synagogues. I took the bait and now I shamelessly ask for your support to raise, not only dollars, but awareness of this issue. If this interests you, consider going to the simcha link in today’s program and make a difference.

Finally, I’ve been asked what it is like to have a bar mitzvah now that I am 13+. A bar or bat mitzvah is a measuring stick in the life of many Jews. It is a point of reference for a life- changing discovery, an unforgettable introduction, a life-rewarding inspiration and self- revelation. It has been many of these things for me, but, more piquantly, it has been a way to further connect with you, as you endeavor to employ the ways of your ancestors—now my ancestors because you are my people—לתקן את העולם—to repair the world. I am so grateful for that connection, ushered in by our clergy: Cantor Abrams, Rabbi Davis and Rabbi Olitzky. That connection was deepened by Zahava Stein (my Hebrew language and literature teacher); Joel3Mintzer (my Torah teacher & legal practice soundboard); and Eitan Weinstein (my tefilot teacher, who while minding the demands of his last year in high school, demonstrated exemplary wisdom, kindness and intellect in preparing me for today. I also owe thanks to the Beth El staff, especially Jill Blustin. Thanks also to friends Marcio, Aurio and Beryl who flew in from Seattle for this special occasion; to always-supportive Raz Goldman and his family who are live- streaming this from Tel Aviv; my family and family of friends for appreciating the significance of this occasion and for indulging my frequent absence to pursue this need, this journey; and, finally, you—the Beth El community for opening your arms to me. Thank you, all, and Shabbat Shalom.