Does Conservative Judaism hold the answer to Israel’s troubles? 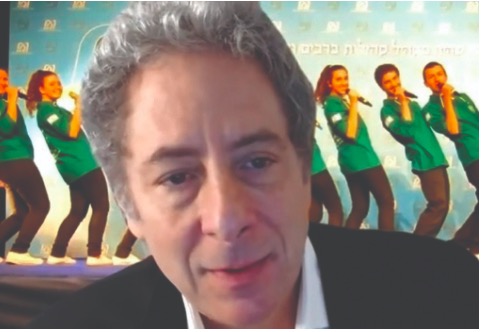 We’re deliglhted that the Baltimore Jewish Times published this story about one of our Masorti Shabbats.  For the second year running, the Masorti Foundation has organized Masorti Shabbats nationwide . This year over 35 Conservative congregations participated on various Shabbats. Speakers from the Movement and from the Foundation were invited address vital issues facing the Movement in Israel and facing Conservative Judaism.

Here we’re republishing the remarks of Executive Director Gideon Aronoff who was the featured speaker, via Zoom, at Beth Shalom Congregation in Columbia, Maryland on June12th.

Does Conservative Judaism hold the answer to Israel’s troubles? It was a question Beth Shalom Congregation sought to answer during a recent presentation featuring guest speaker Gideon Aronoff, the executive director of the Masorti Foundation for Conservative Judaism.

“Israel’s facing this complex and interwoven set of crises that are endangering its future, on one hand as a Jewish state, and on the other hand as a democratic state,” Rabbi Susan Grossman said before introducing Aronoff.

These crises, she said, include the ongoing conflict between Israelis and Palestinians, accusations of election rigging by now former Prime Minister Benjamin Netanyahu, growing tensions between Israel and the Diaspora and an Israeli population alienated from Jewish identity due to the actions of ultra-Orthodox elements.

Speaking via Zoom, Aronoff concurred with many of Grossman’s assessments about Israel’s crises, some of which, he concluded, originated with Israel’s founding. Specifically, he referenced how Israel’s first prime minister, David Ben Gurion, “outsourced” Jewish life and practice to Israel’s Orthodox and ultra-Orthodox populations.

Under the leadership of the ultra-Orthodox chief rabbinate, Aronoff said, there exists a discriminatory system where Orthodox and ultra-Orthodox institutions cause harm to the Jewish life of average Israelis.

This typically takes the form of upward of $1 billion a year going from the state to Orthodox and ultra-Orthodox religious institutions, such as synagogues, schools and rabbis, Aronoff said. By contrast, the Conservative and Reform branches have difficulty receiving more than a couple hundred thousand dollars, normally for youth or Diaspora engagement.

The situation can also be seen in the area of lifecycle events, such as conversion, burial, kashrut and marriage, Aronoff said.

“It’s painful for me to report that in the Jewish state, freely chosen Jewish weddings, officiated by our Masorti Conservative rabbis, are not recognized by the state, and that our rabbis and our couples are, in fact, at risk of two years in prison for these ‘illegal’ weddings,” Aronoff said.

There is also the issue of the Kotel, or Western Wall, which is treated as an ultra-Orthodox synagogue, Aronoff said. The chief rabbinate and its representatives control the site and enforce separation of men and women. A 2009 agreement for greater pluralism at the Kotel was, under pressure from haredi parties, frozen in 2017, he said.

“We saw this as recently as [last Friday], where ultra-Orthodox Jews take this policy as a permission slip to harass and to disrupt Women of the Wall, Masorti, Reform and other Jewish practice at the Kotel,” Aronoff said.

Other crises facing Israel, Aronoff said, include a growing rift between Israelis and Diaspora Jews, the recent conflicts between Jewish and Arab Israelis in mixed cities and regions and political instability and gridlock in the government.

The Masorti movement, Aronoff said, is well placed to play a key role in finding solutions to these crises. The wide range of political viewpoints within the movement allows Masorti Israelis to stand as an embodiment of the values that the new coalition government stands for, he said.

Secondly, Masorti Israel is a movement native to Israel, Aronoff stressed. More than 50% of its activists are native-born Israelis, “building a domestic constituency for a set of values that we share here in the American Conservative movement.”

Masorti is also focused on creating connection between Jewish Israelis and Arabs, Aronoff said. As such, Masorti can play a powerful role in unity and coexistence, he said.

Aronoff pointed to the work done by one of Masorti’s rabbis, Yoav Ende, head of The Hannaton Educational Center in the Lower Galilee. During the presentation, he read aloud some of Ende’s words on coexistence:

“I’ll tell you what we’ve been doing day in and day out here in Hannaton. Because we’ve been working for the last 10 years with courageous partners in the [Arab] villages around Hannaton … we’re talking, we’re creating circles of trust and conversations, we’re standing together, we’re holding up signs that say, ‘We still believe in a shared future.’”

Originally published on June 16th, 2021 by the Baltimore Jewish Times