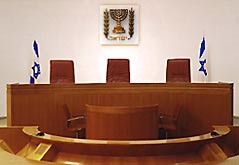 Today’s news out of Israel reminds me of the stirring words of John Lewis, z”l, who declared at the 1963 March on Washington, “To those who have said,‘Be patient and wait,’ we have long said that we cannot be patient. We do not want our freedom gradually, but we want to be free now!”

We frequently write of the one-step

forward two-steps back struggle of the Masorti Movement of Israel for equality in recognition and funding from the State of Israel — one that has over the years won tiny but meaningful cracks in the absolute monopoly of state support for Orthodox and Ultra-Orthodox Judaism. One such crack was an agreement to support some non-Orthodox rabbis working in regional religious councils, as long as the support comes from the Ministry of Culture and Sport, not Religious Services.

The Jerusalem Post reports that our Israeli movement has petitioned the High Court of Justice to protest the decision to end this regional program — allegedly because of the Coronavirus crisis – while continuing to maintain extensive funding for Neighborhood Rabbis, a program that excludes all non-Orthodox clergy.

Yizhar Hess, CEO of the Masorti Movement of Israel and a leading proponent of the struggle against systemic religious discrimination in Israel explains the need for the court challenge and the call to action for equal treatment of religious streams in Israel.

Yizhar declares, “The emergency situation we are in is not a reason for causing blatant harm of this type to the value of equality…In 2019, the state acknowledged that there is discrimination in the funding of religious services, and that it was appropriate that this be fixed as soon as possible for the benefit of the public and the State of Israel.”

Support JPW and the Fight for Equality