Healing an Open Sore: Seeking Justice for Egalitarian Prayer at the Kotel 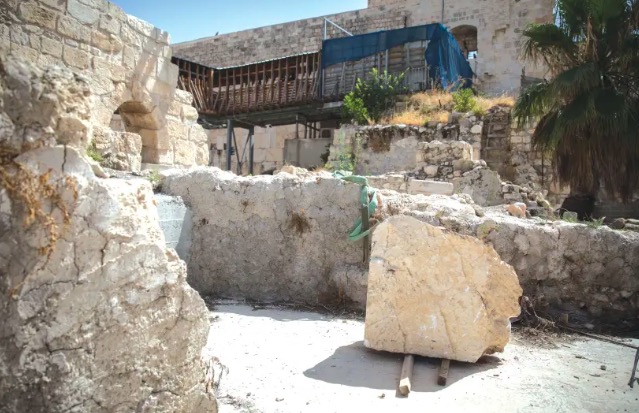 On Tisha B’Av, we share this impassioned plea for justice for the Egalitarian Kotel, written by Masorti Movement in Israel CEO Yizhar Hess and published in the Jerusalem Post.

“When a stone fell down from the Kotel, the day after Tisha Be’av”

The egalitarian Kotel feels like the back seat of the bus and looks like a building site lacking any semblance of dignity or splendor. It has become clear that some holy sites are holier than others.

It’s been two years, to the day. Exactly two years have gone by since that huge stone fell from the Western Wall, or Kotel.

A lot can be accomplished in two years. A female recruit who started her IDF service two years ago will have finished her tour of duty. Mordechai Ardon completed his famous stained-glass windows for the National Library in two years. And, as we have seen, it’s even possible to have three rounds of elections in two years, and still end up in the same place.

But what cannot be done in two years? Putting one, solitary stone back in its proper place.

The day after Tisha Be’av 2018, in the early morning hours, a heavy stone dislodged from the retaining wall built by Herod 2,000 years, ago and fell onto the wooden platform (the “balcony”) of the Ezrat Yisrael, the egalitarian Kotel adjacent to the Western Wall. What a heartwarming media hubbub it generated!

The rabbi of the Kotel rushed to the scene and hinted that this was a sign from heaven due to the mixed-gender prayer services conducted there. The culture minister at the time, Miri Regev – whose purview includes the Antiquities Authority – visited the site accompanied by her communications team, and while sporting a head covering, filmed a moving video.

The chief rabbi of Jerusalem, Rabbi Amar, along with other ultra-Orthodox (haredi) and nationalist ultra-Orthodox (Hardal) politicians, quoted texts that identified the connection between Conservative and Reform Jews and stones falling from the heavens.

Now just imagine how long it would have taken to replace a stone in the “traditional” part of the Western Wall. A week? Two weeks?

Within a day experts from the best engineering firms would have been called in. Within two days, with the assistance of archaeologists and rabbinical support, the stone would have been put back in place and reinforced. Within a week, working around the clock, all of the stones would have been examined, just to make sure they were secure. And then, with great fanfare, the Kotel plaza would have been reopened in a ceremony that would doubtlessly have been attended by the prime minister (because not since Herod has there been someone like Bibi, who takes such good care of the Kotel stones).

But what happened at the egalitarian Kotel?

Nothing. Zero. Zilch. It took the government six months to study the problem. Scaffolding was set up. An investigation was conducted. Experts recommended methods of replacing and reinforcing the stone.

BUT THEN the rabbi of the Western Wall, Rabbi Shmuel Rabinovitch, remembered that this was, in fact, “a complex halachic [Jewish legal] issue” that he would have to examine.

It took him a while to study the matter. Naturally, he chose the most complex method, one that would take more time and require frequent investigations. Then the work began, at a methodical pace, examining the other stones painstakingly.

Finally, after a year and a half – six months ago – they finished and, even appropriately, moved the scaffolding to the other side of the egalitarian

Kotel in order to inspect the stones there as well.

We had been waiting so long for this moment. Already half a year ago we thought that the saga had come to an end, and that families celebrating a bar or bat mitzvah at the egalitarian Kotel would again be able to touch the Wall, something which they had been prevented from doing since the stone had fallen onto the balcony.

After all, this is the only place at the entire site where it is possible to actually touch the ancient stones. So we waited. The government was not in a hurry. As soon as the scaffolding was removed, all that was required was a simple repair job of the wooden floor of the balcony. Just a few planks.

But then, out of the blue, a twist in the plot.

The balcony was installed in its current location by order of the courts in 2002. Now, suddenly, the famous Rabinovitch noticed that the metal posts on which it is constructed touched or rested on stones that fell from the Temple at the time of its destruction way back when.

“This demands a halachic study”, he determined, one for which it is doubtful that an answer would be forthcoming. While he was still deliberating the matter, Mati Dan (of Ateret Cohanim) and Arieh King (Jerusalem’s deputy mayor) turned up, and in seamless coordination, got the Jerusalem Municipality to issue a stay of work order.

They managed to convince the city engineer that repairing the balcony required authorization by the local planning and construction committee and that the Antiquities Authority had never submitted such a request.

Soon, millions of Jews around the world will be remembering Jerusalem on the eve of Tisha Be’av, and many of them will be unable to ignore the inflamed sore caused by one of greatest missed opportunities with respect to Israel-Diaspora relations.

IT IS NOT just two full years since the stone fell, but four years since the rescinding of the Kotel agreement, a carefully constructed compromise, the culmination of a four-year process that was tossed out the window by the government on the basis of short-term coalition threats. Since it was discarded, the government has not missed an opportunity to humiliate, abuse, and belittle non-Orthodox Jewry.

The egalitarian Kotel feels like the back seat of the bus and looks like a building site, lacking any semblance of dignity or splendor. It has become clear that some holy sites are holier than others.

The State of Israel invests tens of millions of shekels every year in the “official plaza,” the Orthodox one, allocated from the coffers of several ministries. Not only has the area surrounding the Western Wall changed itsappearance over the years, from a national site to an ultra-Orthodox synagogue, but it has also become a fortress of sorts.

Any architectural whim proposed by the rabbi of the Western Wall receives authorization. All it takes is a glance at photographs taken during the days following the Six Day War and during the 1970s to see what has happened to the Wall at the hands of the rabbis administering it. From an open and inviting place, it has become a space cordoned off by high partitions and a jumble of buildings.

What a shame for the Jewish people. The cancellation of the Kotel agreement is, perhaps, not the most important issue in the expanding gap between the Jews of North America and the State of Israel, but it is probably the most striking symbol of continued disregard by Israeli leadership of Diaspora Jewry.

A huge gap, a deep abyss, exists between the superlatives used by the government when proclaiming the importance of the connection between Jews in Israel and those in the Diaspora, and what it actually does to reinforce this connection. The Kotel agreement was a golden opportunity – a compromise, a blueprint of reconciliation, an opportunity for respectful togetherness among Jews from different streams and from different continents.

But the government dropped the ball and kicked it around among the partners who worked to achieve the agreement – the leadership of the Masorti and Reform movements, and no less significantly, Natan Sharansky among them.

I want Equality at the Kotel