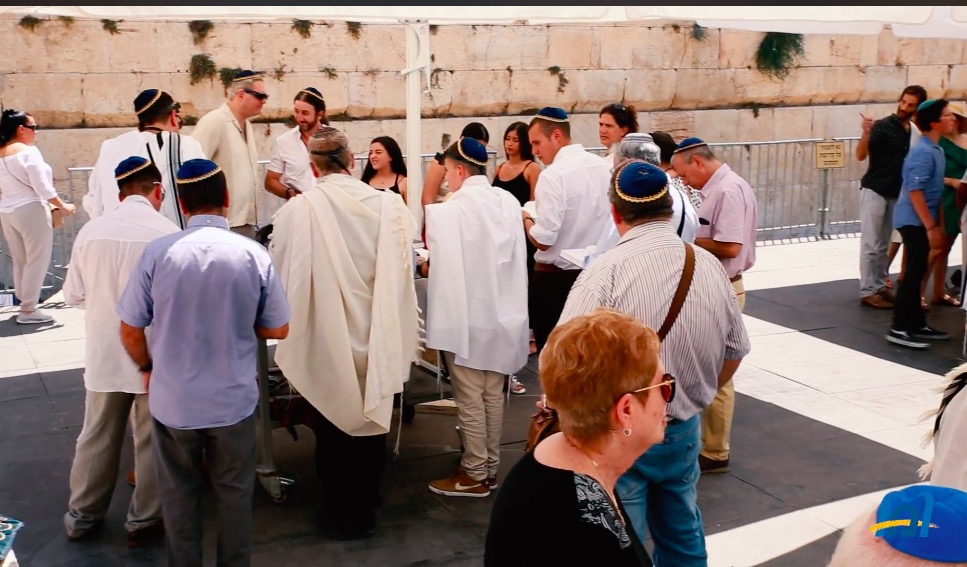 Listen to this lovely and lyrical combination of two famous piyyutim–one to open and one to close the High Holidays: for Selichot, Avinu Malkeinu (אבינו מלכנו) and for the close of Yom Kippur,  El Nora Alila (אל נורא עלילה).

The prayer ‘Avinu Malkeinu’ (Our Father, Our King) is recited during the Ten Days of Repentance and on other fast days, after the cantor’s repetition of the Amida prayer and while the ark (Aron Hakodesh) is still open. The prayer dates back to Rabbi Amram Gaon’s siddur, the earliest siddur that has come down to us.  The tune of the prayer in this performance is in the Ashkenazi tradition.

‘El Nora Alila’ (God of Awesome Deeds) is a piyyut (liturgical poem) recited at the beginning of the concluding service (ne’ila) on Yom Kippur. Composed by Rabbi Moses ibn Ezra—rabbi, philosopher and poet of the golden age of Spanish Jewry—the tune of the piyyut in this performance is drawn from the Moroccan Jewish and Jerusalem-Sephardic traditions.

Combining tunes is typically Israeli, a way to honor both traditions. Nerya Raphael Knafo, the director of Masorti’s Jewish Pluralism Watch sings together with Yahala Lachmish and an exceptional group of Israeli singers and musicians.

The production is made by possible by the Masorti movement through Rav Siach Director, Devora Greenberg, and filmed at Ezrat Israel, the egalitarian prayer space at the Kotel–the only place at the Western Wall where men and women may pray and sing together.

The High Holidays are a time to reflect on the kind of Israel we want: the Israel of the Founders, an Israel based on the  bedrock values in the Declaration of Independence–equality and freedom.  These are the values that the Masorti movement espouses, defends and promotes throughout its 80 kehillot and beyond, in Israel. We hope you’ll consider making a generous High Holiday gift so that Masorti can continue its work in Israel.

I want to make a High Holiday Gift to Masorti