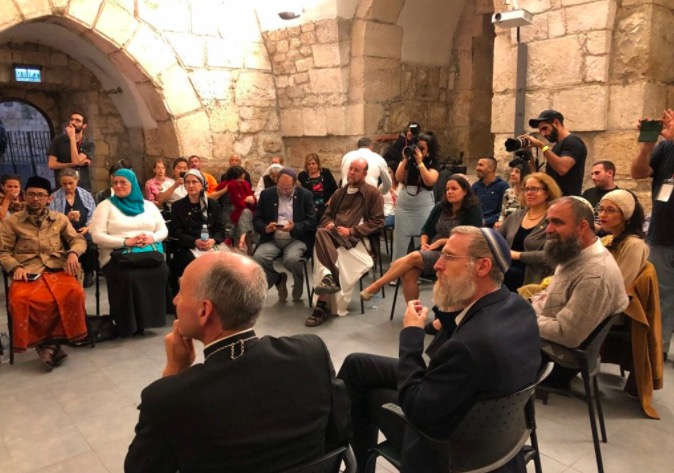 “A Rabbi, a Minster and a Muslim Sheik Meet Up…”
The Masorti Movement’s Vision of Inclusion for All Israel

“I see our mission as a Masorti community to step out of our inner circle and be active and involved in the greater society around us.”

Yes, I want to support inclusivity and pluralism in Israel

“A rabbi, a minster and a Muslim Sheik meet up” is usually the start of a joke. But given the tense relationships that exist between communities of faiths, such a meeting in Israel might be seen as extraordinary. Yet for the Masorti Movement and its congregations, reaching out to neighboring Muslim and Christian communities is a frequent expression of a core Masorti value. Whether in the North or South, building relationships of trust is key to advancing the vibrant, inclusive, shared society Masorti dreams of for all Israelis. Masorti Movement congregations lead the way.

In the North of Israel, in the Masorti congregation of Kfar Vradim in the Galilee, a highpoint of their year is their Sukkat Shalom Festival – an interfaith gathering celebrating its 18th year where clergy and residents from neighboring Druze, Muslim and Christians communities join for four days of lectures, cultural programs, musical performances, activities for children and youth, study groups and more.

This year, Kfar Vradim launched a new program, “The Galilean Interfaith Beit Midrash for Peace and Friendship” to study sacred texts from all religions in a “Beit Midrash” style of learning, promoting religious discourse between men and women of faith who seek peace in the community and the country.

Rabbi Nathalie Lastreger, the spiritual leader of the congregation since 2016, has taken over the leadership of the Festival and talks about the event: “My assumption always is that everyone wants and wishes for peace, from the right and left, Arabs and Jews, because humans, by nature, desire life and not death…There are challenges and difficulties along the road, but our partners are honest and brave. We talk about the difficulties, the fears, including our fear of the “other”, of encountering those who are different from us – but alongside recognizing these fears, I feel we have planted seeds of hope, optimism and faith…. I believe that just as we, Jews, Arabs and Christians gathered together in appreciation at our Masorti synagogue in Kfar Vradim – speaking peace, singing peace, and laughing peace – so we are obliged to pass this hope on to the communities and people living in this country.“

In the South, more than any other area of Israel, the frequent contact of peoples and faiths in the Negev lends itself to cooperation between the different faith communities.

In response to the tensions caused by a shooting at the Central Beersheba Bus Station in 2015, two women, Amirit Rosen and Roxana Golan, started a dialogue to advance peace. Amirit Rosen, then a student at the University of Beer Sheba and currently a rabbinical student the Masorti Schechter Rabbinical Seminary, and Roxana Golan, an active member of the Masorti congregation, Magen Avraham in Omer, created “The Interfaith Initiative in the Negev – a project initiated by Magen Avraham and its sister Masorti congregation Eshel Avraham in Beer Sheva.   “It was important to us that this initiative should not amount to “all talk and no action”, but rather we aspired to create a substantial impact on the way our communities perceive each other” recalls Amirit Rosen.

Crucially, faith leaders from all communities and religious streams were invited to participate. And sure enough, within a short time, Catholic priests, Muslim imams, Orthodox and Reform rabbis joined the forum. Over the years, a strong and true friendship emerged. By bringing together young people from the different communities, they strengthened personal and group identity and promoted tolerance, inclusion, and deep respect for the identity of the other.

Rabbi Michael Even David, leader of the Masorti Eshel Avraham congregation in Beer Sheba, hosted a large gathering of leaders in their community’s Sukkah. “Over 50 people showed up, we sat together, Jews, Muslims and Christians and studied texts related to the concept of Peace and Shalom. It is important for me that my synagogue be involved in such activities as I see our mission as a Masorti community to step out of our inner circle and be active and involved in the greater society around us. Even during these challenging Corona days the group held a meeting over Zoom and discussed religious sources which provide comfort at a time of uncertainty, sharing the pain we all feel.“

Rabbi Lastreger of Kfar Vradim concludes, “Across Masorti Israel we recall the mandate from Pirke Avot that it is not incumbent upon us to complete the work, but neither are we at liberty to desist from it. This is the most important mission facing us all — for our sake, for our children’s sake and the future of all the inhabitants of this land. Our calling is not to fall into despair, not to give in to our fears but to believe in goodness, in activism and in the possibility of change!“

Yes, I want to support inclusivity and pluralism in Israel