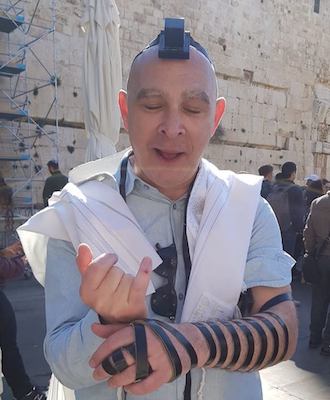 When Adar begins, we increase…

This morning I saw a large group of Jews who have changed this well-known phrase about announcing the arrival of the month of Adar. The month that symbolizes the imminent arrival of spring and with it, the festivals of redemption of the Jewish people. This is the months that we declare joy!

A number of times a year I go up to Jerusalem to pray with the Women of the Wall. this morning I didn’t go just to pray with them, but also to celebrate 30 years of their fight to pray to God, in the same way that any other Jew is allowed to pray to his or her maker, at the Western Wall. And, as usual, many groups of haredim – yeshiva boys and seminar girls – were waiting to protest against the Women of the Wall and whoever supports them.

Unfortunately, I have already grown accustomed to their shouting and cursing, as well as their shoving. But this morning the atmosphere was far worse than “normal” (if you can term the previous experiences as normal). Today hatred totally took over. The implied calls to kill were more numerous than in the past. The physical violence was more than I have ever experienced in the past.

I grew up in Britain, in the sixties-seventies-eighties of the previous century. I always walked around with a kippah on my head. I was not afraid. Just a few time, in the 24 years that I lived there, was I called Jew or Yid, or something similar. Once, two friends and I were physically attacked by young ruffians, whilst we waiting for a lift home from our Jewish school. That is the anti-Semitic, physical violence that I experienced in England.

This morning, at the Western Wall, in the heart of Jerusalem, in front of police and Western Wall ushers, not only was I shouted at and cursed, but I was pushed, kicked, pushed to the ground, spat at and had my kippah pulled from my head. This is the anti-Semitism that I experienced today. At the hands of youngsters who think that they are safeguarding Judaism. Youngsters who have been taught that anybody who is not like them, not only are those people not Jews, but they are “goyim”, heretics and apostates. Youngsters whose parents and teachers look on from the sidelines and encourage them.

This morning was traumatic – for me and for hundreds of Jews, sisters and brothers, who came to pray at the Western Wall. The trauma, in my opinion, is not from the violent behaviour itself, but from what stands behind it. A whole generation of haredim – non-Zionist and Zionist – is being brought up on a Torah of hatred, which they are being fed at home, at school, in the yeshiva and at the seminar. Education that is called religious – but has no connection whatsoever to Judaism. Education that is paid for by the state – i.e. you and me!

I am too tired today to think about how we move forward: how can we progress, how do we bring down the level of hatred, how do we encourage coexistence between the various streams of Judaism. But it is clear that the Jewish people and the state of Israel must understand that only through pluralism (and not just in the realm of religion) can we live together. Only through education to true Jewish values (and hatred is most definitely not one of those values) will we find to the way to respect the other as we do our friend.

We must prevent the coining of a new saying: When Adar begins we increase hatred!

(In the picture: luckily only my little finger got hurt!)