In an exciting breakthrough for the Masorti movement,  the Vaani T’fillati Siddur Yisraeli, is for sale in mainstream bookstores throughout Israel, thanks to a joint publishing venture between Masorti, the Rabbinical Assembly in Israel and Yedioth Books Publishing House, the leading book publisher of Judaica for the general public.

Rabbi Mauricio Balter, who chaired the Masorti/RA-Israel Siddur Committee, said “The balance between tradition and change, and with well thought-out explanations alongside the t’fillot, makes this a siddur that reflects modern Israel. I cannot exaggerate the importance of this development to the acceptance of Masorti Judaism in Israel.”

The attractively-designed Vaani T’fillati includes modern Israeli poetry and special prayers for uniquely Israeli moments. Its presentation by a major publisher, Yedioth Books, a sister company of Yedioth Ahronoth, Israel’s largest selling newspaper,  as well as its placement in stores throughout Israel, is just one more reflection of the fact Masorti is becoming an important part of mainstream Israeli religious preference.

Rabbi Balter thanked the committee, which labored for four years  to update the decade-old siddur, originally edited by Rabbi Simcha Roth under the direction of Rabbi Michael Graetz.

Masorti is especially grateful to Sarah Lewis and her family and friends, whose generous gifts underwrote the costs involved in the development and preparation of the new siddur, which is dedicated to the memory of Rabbi Albert Lewis, z”l. Rabbi Lewis served Temple Beth Shalom in Cherry Hill, New Jersey for 60 years. 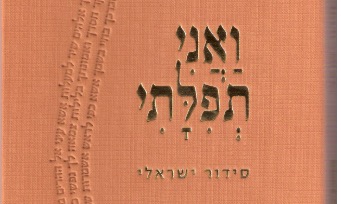