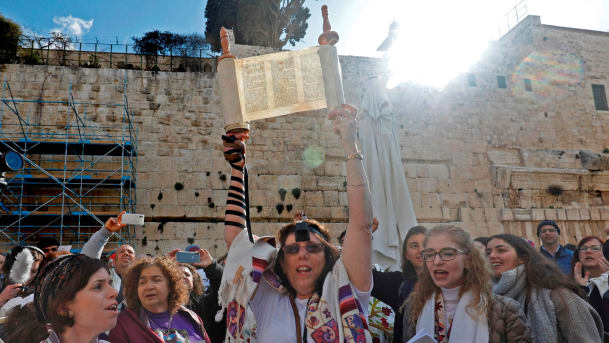 In a searing Opinion piece published by Haaretz on March 12th, Executive Director of the Masorti Movement, Yizhar Hess, pours out his heart–and his disgust and frustration–at the shameful behavior of the Orthodox as they viciously attacked Women of the Wall celebrating 30 years of prayers.  What should have been a joyous celebration by Jewish women was marred by violence, by pushing, shoving, and even spitting on rabbis, on women, and on the men who support them.

It’s a riveting first-hand account of what happened at the event:

“Thousands of teenagers were bussed in with one goal: Harassing the Women of the Wall and preventing them from praying. The harsh cursing that accompanied their acts of physical violence were a new low. Even the most veteran members of Women of the Wall said they could not recall ever being subjected to such intense hatred.”

“In the public plaza adjacent to the prayer area, where we, the male supporters of Women of the Wall, stood, real violence raged…This was a crowd that had been incited, with a burning fervor. They surrounded us in waves, in circles. They had a strategy: From the closest circle they begin grabbing. One hand pulls at your prayer shawl while, from another direction, someone grabs your skullcap, and yet another grabs the other corner of the prayer shawl, which is already being dragged on the ground.”

In the midst of this truly shameful behavior, some acts of courage and kindness stood out.  First, that Women of the Wall held their ground.  They will not be discouraged or deterred.  Second, that so many people –women, men, young people — came to support and celebrate Women of the Wall:  “Israeli paratroopers who liberated the Wall in 1967 were standing there with us. About forty men, now in their 70s, members of the paratroop battalion that liberated the Old City, showed up in solidarity. They, too, were assaulted.”

While there is stunning silence from the Prime Minister, and less than helpful behavior by the police at the event, Yizhar Hess makes on thing clear: women will not be deterred from fully participating in Jewish life, prayer and practice. He compares Women of the Wall to the suffragettes who fought for 100 years for the right to vote. They too were disparaged, treated shamefully and even jailed.  But they prevailed and so it will be for Women of the Wall and all those who cherish Jewish values of inclusion and pluralism.

“Women of the Wall will win this battle because it is clear today that in the religious realm, women are no longer invisible. Opponents can call it a provocation as long as they want, but in another 100 years, these women will be remembered as pioneers.”

Watch the video of Yizhar (and Jewish Pluralism Watch Director, Nerya Knafo) surrounded and harassed by the crowd).